Ermy is a career soldier for Over-king Stefan Boarke, Archduke of Raxus. Ermy joined the military at the age of 13, after his families farm had been burned to the ground by an orc attack, although most of his family survived the attack, Ermy’s brother Ertman lost his leg and with the loss of the farm the family could not afford to feed and house everyone anymore.

Ermy started his service as low as one could digging latrines and emptying chamber pots, he distinguished himself by killing three orcs at the age of 14, when they snuck into camp at night to do what orcs do… Ermy was credited with saving many lives that night and was given a battlefield promotion to private.

Ermy, then worked his way up the hard way, every step of the way, every inch measured in blood. Ermy has been in hundreds of battles on land and dozens on sea, he is a consummate professional solider and a solid tactician. He is hard and unyielding however his men know with absolute certainty that Ermy values them and their lives more than his own. They would and have followed him into seemingly impossible situations.

Ermy has a general disdain for anyone who is not a soldier, and a special hatred for orc’s, arcane magic-users, cowards and bullies. He absolutely believes that the militaries place is to serve the lord of the land and protect it’s people. Ermy is plain spoken to the point of rudeness, his skill as a soldier often insulates him from being taken to task too much for his interactions with those of higher stations. Ermy is aware of this and makes sure that he never intentionally tries to show off in this regard.

Ermy’s current rank is Sergeant Major and he has been offered an officer’s commission more than a dozen times. 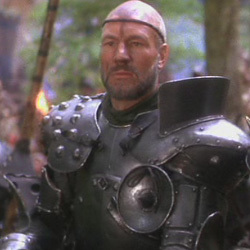