Ambassador of The Free City of Greyhawk

Marco is the current ambassador from the Free City of Greyhawk to the Great Kingdom. Marco is an affable man from the right family. His family holds respect and influence but not much in real power. Marco’s father Merrreck squandered much of the family wealth and even though the family is still very wealthy by most standards, they are not old money wealthy anymore.

Marco was raised and educated a gentleman but floated from interest to interest showing no real passion for any endeavor. Upon his father’s death Marco discovered the state of the family finances and became acquainted with several collectors who had various claims on the estate. Marco did his best to settle these obligations without drawing shame or destitution to his house.

In the end, Marco accepted the role of a noble catspaw for a ruthless thieves’ guild called the Dread Smiths. It is one of the worst keep secrets in the Free City, everyone knows he is a puppet and more so Marco knows that people know.

Marco tried to break free of the influence of the guild nearly a decade ago, it cost him the three fingers on his left hand and his youngest daughter who was taken as a hostage by the guild. It is widely whispered that his daughter is being used as a courtesan.

Ambassador of The Free City of Greyhawk 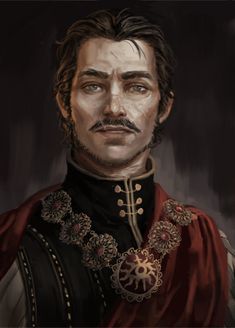