Josiah Montefor, more famously known as the black death of Hextor is a notoriously pious inquisitor of the faith. During the Chaos War, Josiah, initially walked the path of an anti-paladin of the faith. He was stationed in Chathold, was married with three children, all sons.

During his duties rounding up, flogging and dispensing justice to criminals and other such undesirables he noticed dark marks on many of them. He brought his concerns to the head of the local church precinct Bishop, a man named Abbot Bile. Bile dismissed the concerns as unimportant and sent Josiah on his way.

Josiah followed command but felt that he was duty bound to investigate, as contagion is a fear in any city. As the months went on Josiah became convinced a disease was working its way into the populace and that several Hextorian churches knew it, but was keeping it quiet… but why? Why would they keep it quiet?

Josiah went to another parish of Hextor under guise of invisibility and after services, to his dismay, he saw two citizens seized and a dark ritual to a god who was not Hextor was being performed. Josiah sprang to action and slew the priests and their servants; he then went to his field commander to report the heresy. His field commander, Jar Teldon, under pretenses of lending healing aid, disarmed and arrested Josiah.

The next day, Josiah was released, he immediately went to his home where he was greeted by his wife… She was marked, his sons were all marked as well. She explained that Bishop Bile had come over late in the evening, told her that Josiah was in mortal peril and asked her and the children to “pray with him.” She then remembered waking up at dawn. As she spoke, Josiah tried to lay hands upon the mark and destroy it through the power of Hextor, it failed, she asked Josiah why he was weeping, and he told her as he geared up his spare weapons and armor, that he loved her and the kids and was glad to be home but he had duties to perform and would be back soon. With that he walked away.

Josiah went to Bishop Bile’s church and Bile was there with guards to confront him. Bile informed Josiah that he’d given his wife and children the Dark Mark and that as long as Josiah stayed silent and compliant, he would remove the marks when the time came. Josiah knew that was a lie… Josiah drew his sword and smote the villainous heretic and his cronies. A grievous battle took place and in the end Josiah, killed the Bile and 7 acolytes but he’d received a mortal wound, and fell to blackness…

Josiah felt the power of Hextor flow through him and received a holy vision that stripped away the mystery of the mark. He arose healed but almost a day had passed and armed with the knowledge of the vision, he knew what was to happen in 12 short hours on the night of the eclipse.

Josiah went to the city’s guard and recruited men he trusted, then they took down commander Teldon, at which point Josiah took command of the rest of the paladins. He instructed that all those that bore the mark needed to be purged. Josiah’s first stop was his own home and he purified by flame his wife and three sons. Josiash’s squads purified almost 1500 people before the Dark Marks quickened; birthing the evil forces of Cthulhu upon the world. Josiah organized the retreat from Chathold and was the last man to leave the city. Even though the city fell, the actions of SER Josiah Montefor was credited with saving thousands of lives. The survivors hailed him as a hero and all wept when upon learning that he had lost his own family.

Josiah received a formal knightship and was offered a place of prominence and command within the new government of Chathold. Josiah turned down the position in the government saying that he would not serve two masters and that for the rest of his life he’d hunt the enemies of Hextor and rip heresy out of the church root and stem.

SER Montefor has never remarried, nor has any children… 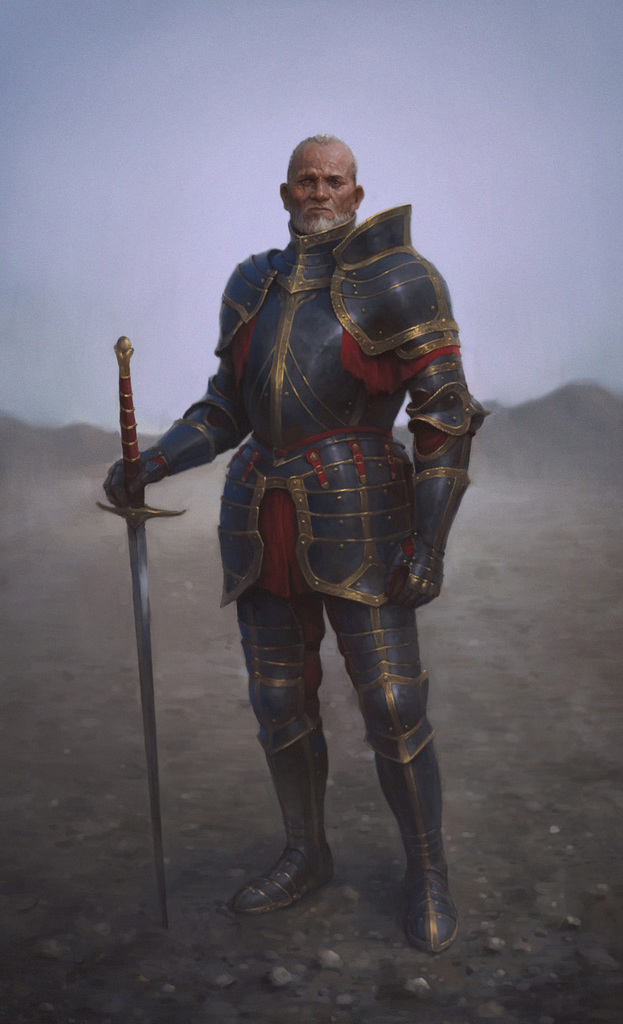