Hailing from his adopted lands of the Sea Princes Thay'd's looks appear to be of the main land. Fair of skin, tall and lean, he carries several unorthodox weapons.

Thay’d Catiph is a tall lean, whip of a man. He moves like a cat made of coiled spring steel and seems to effortlessly glide when in motion. His features are sharp and strong, comely enough to catch notice but not enough to solely sway a heart. He wears his hair long pulled back in loose braids and knots with a few beads and rings. He wears no beard but is rarely clean shaven, his whiskers like his hair are a confusing sun-kissed chestnut.
Looking upon Thay’d causes many pause, the man bears the features of one from the Great Kingdom yet wears the garb and shows the signs of a mariner of the seas – yet carries himself as a noble. His gear is minimal, contained in a few belt pouches and a small pack, his weapons an exotic and unorthodox jumble a hand-and-half fencing blade, chakrams, a net, and brass sea knives. If he is a fighter he must be mad as he wears no armor and carries no shield. You may catch him flashing a green-eyed stare, almost a dare in and of itself. He is unnerving in his mystery as disciplined men cannot easily place him.

Thay’d Catiph will tell you he was born twice, once to Severen, the God Whisperer, a master stone mason of Great Kingdom and famed through out the lands. Thay’ds second birth was into the house of Modin, 4th house of the Sea Princes. Modin’s sigil is a clawed flying fish between a sheet of white and blue.

Til the age of ten Thay’d grew into a family unlike any other. Nobles, common born, artists, magicians, the faithful all followed his father, a small army of builder acolytes. Commissioned to bring the faithful across the lands closer to their gods, Severen was single minded in his purpose and held the time and choosing of his projects over even the say of patrons and lords of the land. Every building raised by Severen was and is still, a holy place. Infused with magiks never before seen, the man was able to divine through his building the proper conduit to channel true divinity. There are sixteen (16) temples designed by Severen a legendary master of stone, iron and wood. Thay’d saw his father raise three such structures in his short time and many whispered that his fathers talents and his secrets had found another set of hands…

There is an old saying, “the sea does not alter for the course of the ship” and Severen’s course encountered tragedy. Thay’d saw his first family break like water upon rocks.

Severen’s death was made of his own desire to find a convergence, a point, a place where all gods could shine and be felt by mortals. A dark cabal posing as followers of Fharlanghn, the Dweller on the Horizon, god of Horizons, Distance, Travel, and Roads lured Severen and his acolytes to a remote area where they claimed the god had started his journey. The opportunity was too enticing and Severen, his followers and his family were ambushed and enslaved. For six months the group toiled at a convergence, just not the one Severen had hoped. This was a convergence of ley-lines, a power source magnified by Severen’s seventeenth monument… There were many slaves to help build the abomination atop a ancient catacomb where whispers could be heard constantly echoing, voices just beyond the ear’s comprehension. Some such slaves were from the isles of the Sea Princes, house Modin and it’s young heir captured on his first sail. Namir Modin or “Sable” or Namir the black, for his fine black hair was the first born of house Modin and Thay’ds age. The children were worked along with the men and women, it was a true hell and many died but Thay’d, his sister and Sable became inseparable during their trials. Upon completion of the work a ritual was held and something came through from some dark dimension, everyone heard it shrieking from the slave pens whatever it was – as none could see its form… The next day the slaves were sent to the Catacombs and sealed in, the imposters work was done and they had succeeded in calling forth something… It was cold and dim in the catacombs there was little food and many slaves died trying to rush the tunnels as they collapsed. Severen placed Thay’d and the children under a keystone for protection as rocks rained down, that was the last Thay’d saw of this father. The thought of being buried alive quickly paled as it became clear over days and then weeks that there were strange vile creatures pushing through the convergence and using this place as a door. The creatures fed on terror and killed just one person a day until it was only Thay’d, Jos’lyn and Sable remaining. The children survived for four months hiding, fighting, avoiding other lost souls, former friends, who turned on one another long ago. Thay’d was the one to keep them safe. The time in the catacombs changed the children and heightened aspects of each. For Thay’d that meant his speed and dexterity grew significantly as well as his ability to tap into or manipulate arcane reserves within himself. Even though the children grew in power it was not that which saved them. Their tomb was breached and the children were rescued by The Grey Mariners, warrior monks and followers of Tritherion who had been tasked with the finding and liberation of the children by Alden Modin, Waverider of the 4th House and father to Sable. The remains of the temple were razed and destroyed and the catacombs buried forever by the Grey Mariners.

Thay’d and his sister were brought by ship to the isles of the Sea Princes where Alden greeted them with open arms and adopted them into his family. Thay’ds life became very different; fighting and fencing with antique weapons, sailing, commanding men, learning tricks from grizzled old sea dogs, shellbacks and rogues of all sorts. He also learned the ways of nobility and court, reading, writing, a bit of the arcane… He even apprenticed under the Grey Mariners for two years. Thay’d Catiph is a dangerous man, he learns, adapts and wins, in unorthodox fashion. He can be both cautious and bold, kind and fierce… He is slow with his word but honors it when given. A true survivor and opportunist tipping the scales to assure he and his succeed.

Thay’d first family remains only in part, his younger sister Jos’lyn survived their ordeal. She has grown into a fine beauty and the childhood tragedies they both endured has manifested into a wellspring of sorcerous power that she is just discovering.

Thay’d now journeys with her to find her a match in their old homeland. His brother Sable accompanies, claiming he feels a draw towards immense ley-line power tugging him towards the Great Kingdom. A strange prospect to Thay’d, but Sable has always been grim and strange in his predictions.

Thay’d worships Tritherion, and his Chakrams are a reverent homage to the god of individual freedom and protection who’s followers saved him, his sister and his new brother… 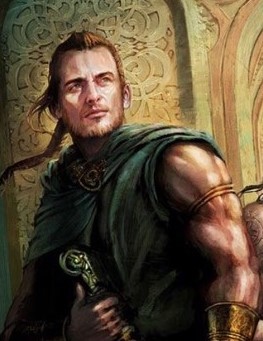